Slow cooker pork shoulder recipe is an easy and flavor-filled meal for the family. The shredded pork is perfect resting on top of mashed potatoes with gravy or as a sandwich on a toasty sesame seed bun.

The recipe is super easy and you can prep it in about 10 minutes. Plus, the meal will cook in the slow cooker while you’re at work or doing something else (and not worrying about dinner).

I love cooking dinner in the Crock Pot. You can get it ready in the morning in a matter of minutes and let it cook throughout the day.

You’ll come home to a wonderfully moist and flavorful dinner.

If you like this recipe, you’ll love this Slow cooker pork chops and gravy recipe and this slow cooker pot roast.

Be sure to watch the video to see how the pork shoulder roast recipe is made.

This pork shoulder with gravy recipe will feed a lot of people and it’s not terribly expensive, either. I will buy meat when it’s on sale and then freeze it until I am ready for it.

What Do I Need To Make This Pork Shoulder Roast Recipe?

Full printable recipe with measurements and instructions listed below.

How Do I Make the Pork Shoulder Recipe?

How To Make Pork Shoulder With Gravy

Start by adding the cream of chicken soup to a medium-sized bowl.

Next, add the cream of mushroom soup to the bowl.

Now, add the onion soup/dip mix to the bowl.

The onion soup mix is packed full of flavor and will taste amazing.

Add the salt and pepper to the mix.

This looks like a ton of salt, but it’s not. It’s just an up close picture.

Salt and pepper are optional as the onion soup mix is already somewhat salty.

Pour the water into the ingredients and mix well.

Grease the Crock Pot with non-stick spray and add the pork shoulder.

Pour the gravy mixture over the top.

When the pork cooks, it will release a lot of liquid and sometimes it comes out thick, but if not you can add some flour after the cooking process, which is what I do in the pictures below.

Once you’re done cooking the pork, after about eight hours, remove the meat from the Crock Pot and place it into a large bowl.

You can see in the picture above that there’s quite a bit of liquid. If it’s not thick, you can add flour, as shown below.

How do I know when my pork is done?

There are a couple of ways to check if the pork is done. First, you can use a thermometer and if your pork is at or above the 145-degree mark, your food is done.

Just be sure not to allow the thermometer to touch the bone or you will get an incorrect reading.

Once the temp reaches 145-allow the meat to rest for several minutes before eating.

When the meat falls apart, it’s done. You will notice after at least eight hours of cooking on low heat that the pork will most likely be falling apart when you lift it with a fork.

If it’s not, you can cook it longer until it does fall apart.

Remove all of the bones. While cooking, the bones help give the dish a lot of flavor, plus there is collagen in the bones and that is so healthy for you.

While the pork is in the bowl and you’ve removed the bones, add some flour to the liquid, which will help it thicken.

Whisk the flour and return the pork to the slow cooker for at least 45-minutes to one hour.

This will give the gravy time to thicken and cook more.

Once you’ve cooked the meat, remove it and serve over mashed potatoes, or add to a bun for dinner.

Spoon the gravy over the top and you have a great meal.

Other sides that go well with pork shoulder:

Check out the slow cooker pork shoulder recipe card below, grab those ingredients, and start cooking! This is a great meal for the entire family and I think you’ll really love it. 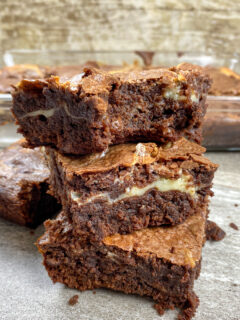 I did not add water, the pork provided plenty of liquid on its own. I did add an onion and minced garlic. Super yummy 😋

That's awesome to hear. Thanks for sharing!

Could I use two cans cream of chicken and skip the cream of mushroom?

Yes, you can. I’ve done that and it’s delish!

Ham And Potato Casserole - Back To My Southern Roots

[…] Slow cooker pork shoulder only takes a few minutes to get into the pot and cooking. […]

Pork Chops in the Air Fryer - Back To My Southern Roots

[…] great thing about pork is that it is filled with a multitude of nutrients including protein, niacin, and vitamin […]

Slow Cooker Pork Chops and Gravy - Back To My Southern Roots

[…] for a satisfying, nutritious, and delicious dinner, you’ll love this how-to recipe for tender pork […]