This pecan cinnamon roll recipe is an absolutely divine dessert with cream cheese frosting and chopped pecans. I’ll show you how to make the cinnamon rolls in this step-by-step post. 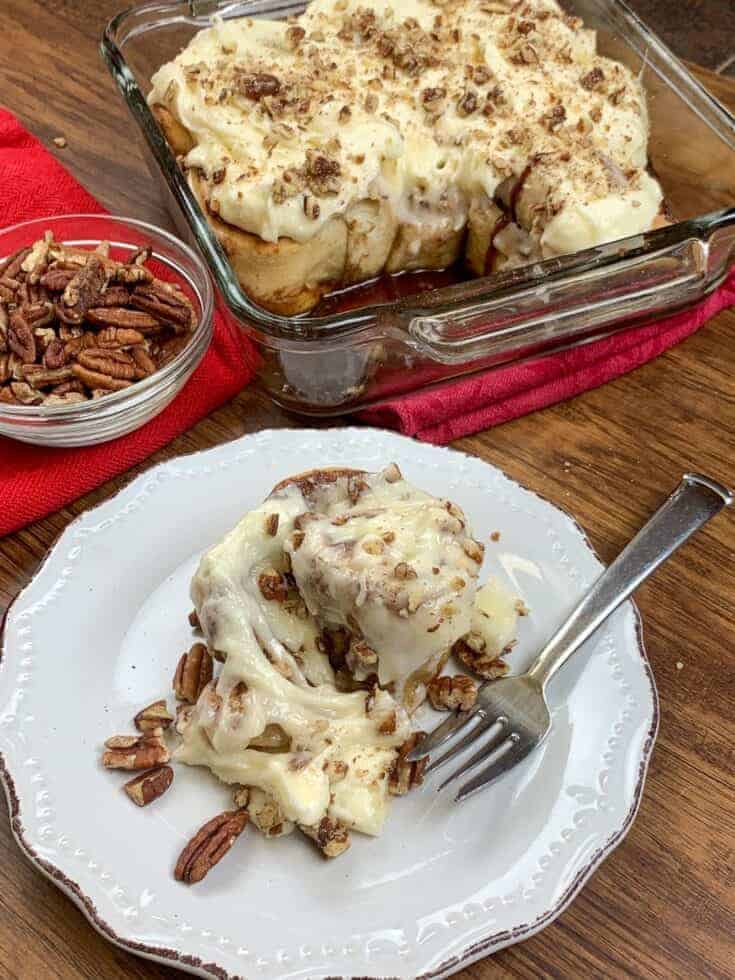 These really are the best cinnamon rolls and they taste better than Cinnabon, plus, they don’t cost much  and are very easy to make.

For this recipe, I used premade pizza dough that I bought at the grocery store and I skipped waiting for the dough to rise before baking.

In all, it takes about 10-15 minutes to get the easy homemade cinnamon rolls ready and into the oven, and then about five minutes to mix the frosting, and you get a warm, decadent, and amazingly delicious dessert.

If you love pecans, give these praline pecans a try.

What do I need to make the cinnamon roll recipe? 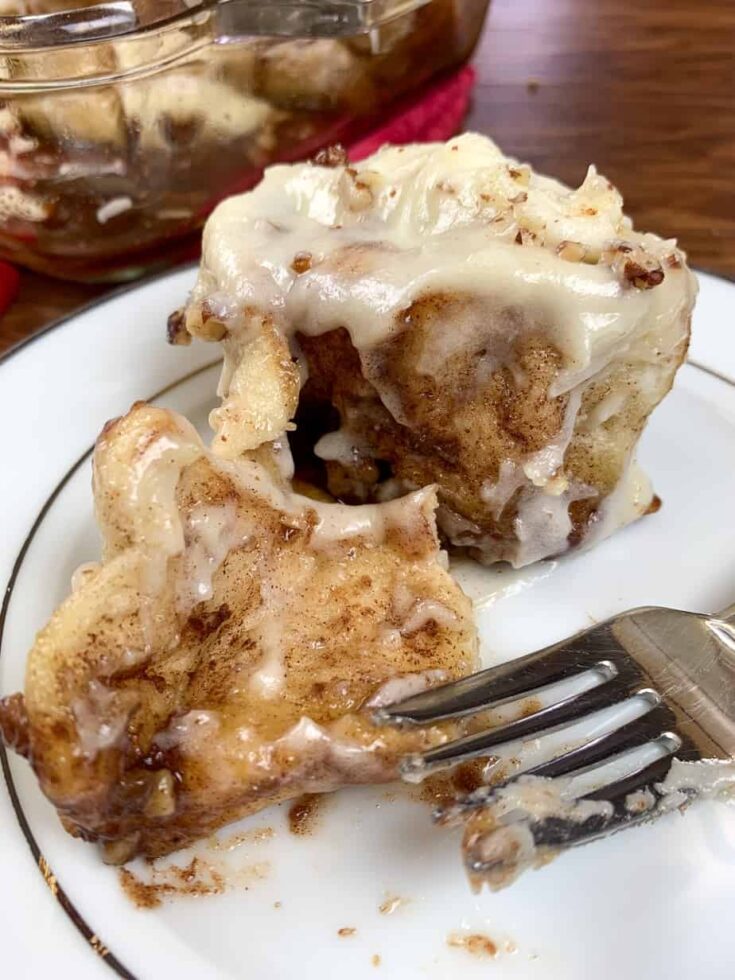 How do I make the pecan cinnamon roll recipe? 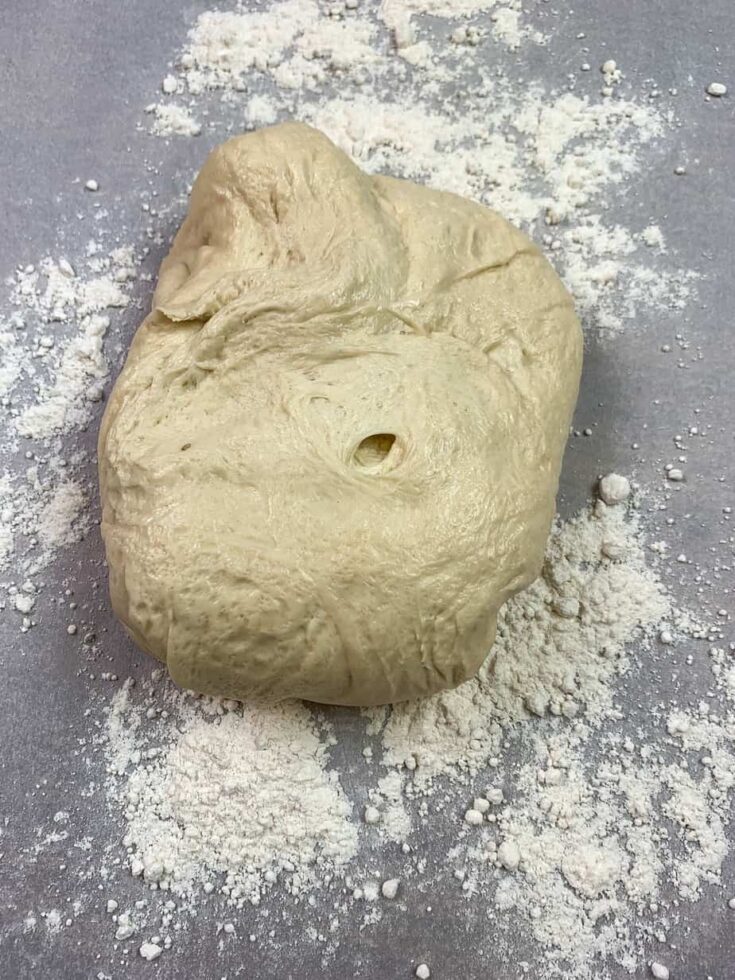 Open the package of pizza dough and roll it out on a piece of parchment paper.

I used fresh pizza dough from the bakery at our local grocery store and rolled it out on some flour so it wouldn’t stick. 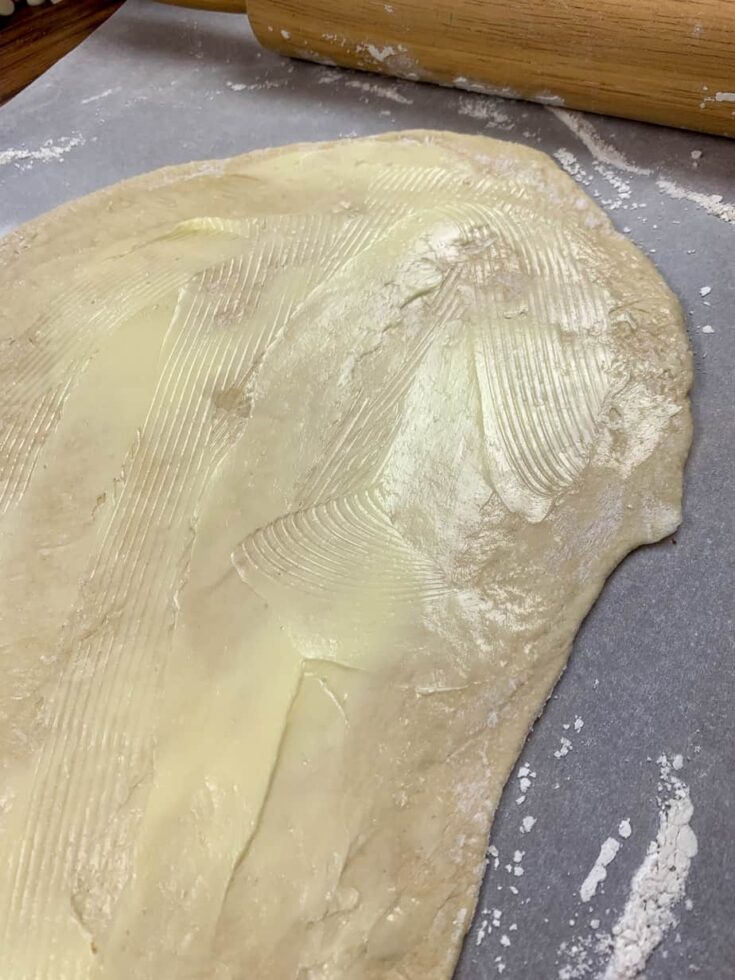 Spread four tablespoons of softened butter on top, going all the way out to the edges.

The pizza dough from this store is delicious but doesn’t want to roll out into a rectangle, so I did the best I could. It doesn’t have to be perfect, just rolled out. 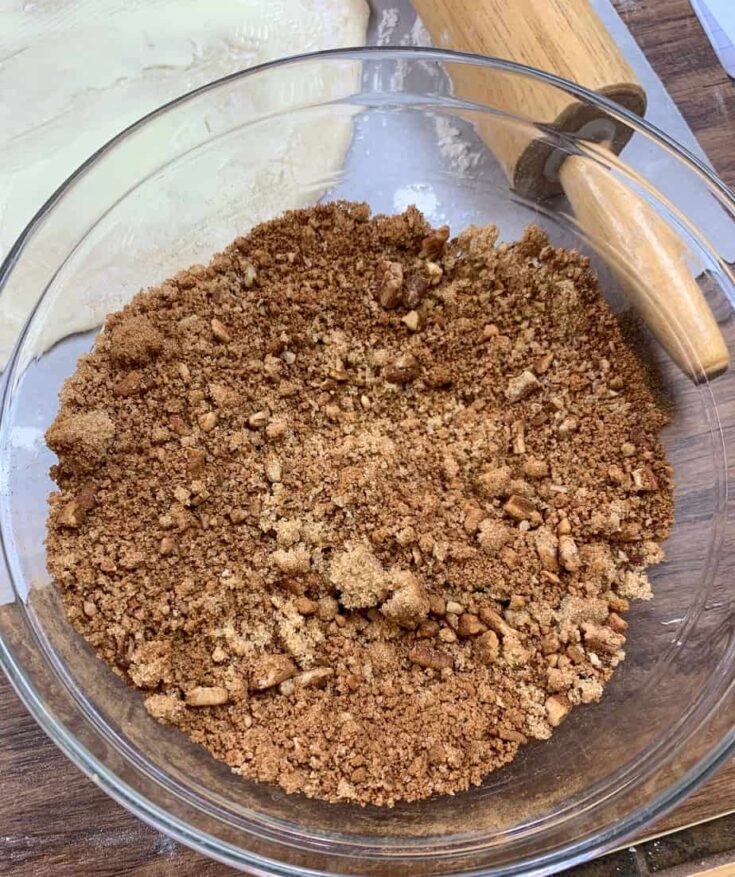 Add the brown sugar, cinnamon, and 1/4 to 1/2-cup of chopped pecans (depending on how many you’d like) to the bowl and mix. 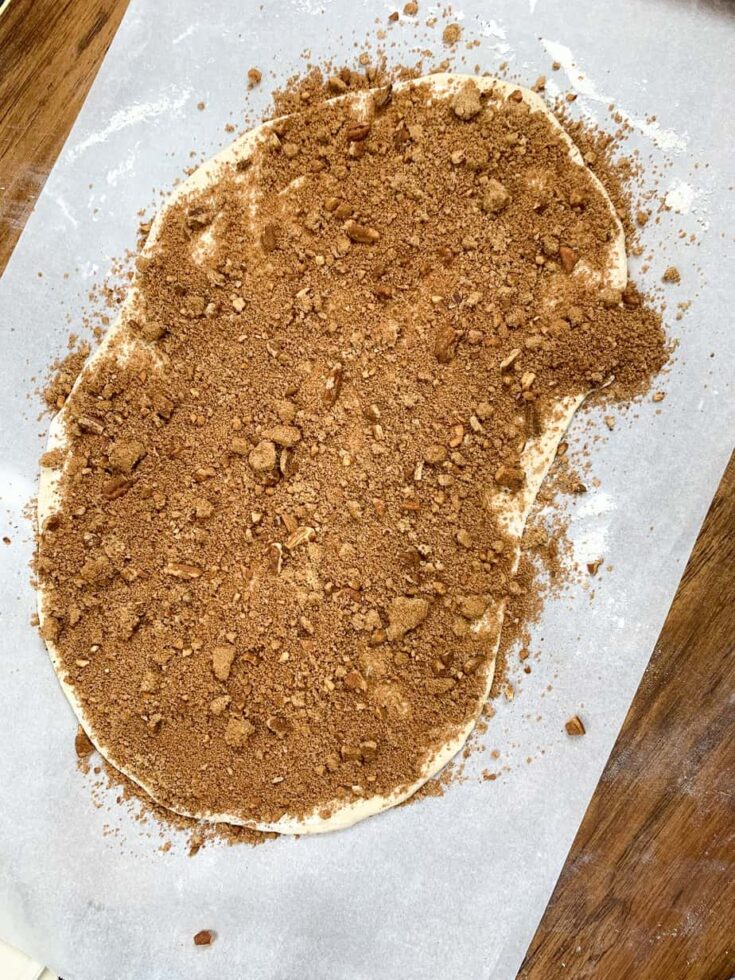 Sprinkle the brown sugar mixture on top of the pizza dough, all the way to the edges. 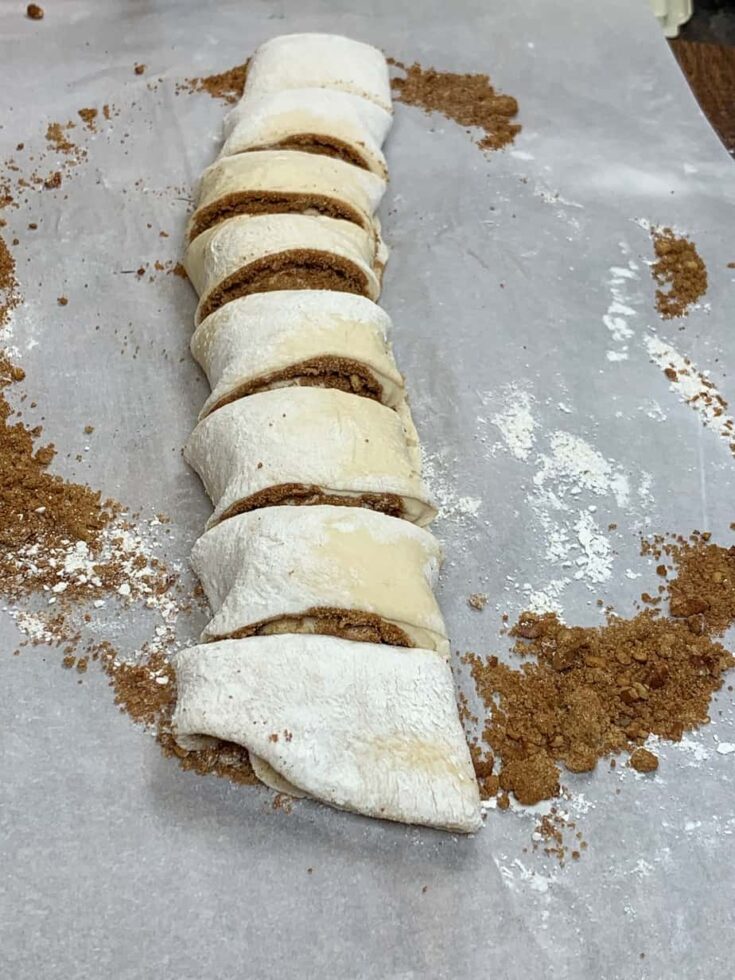 Roll up the cinnamon roll dough and slice, about three inches apart.

Don’t worry about giving the cinnamon roll a tight roll. It’s ok if it’s a little loose. It will be messy, so have your pan close by as you transfer it from the parchment paper to the dish. 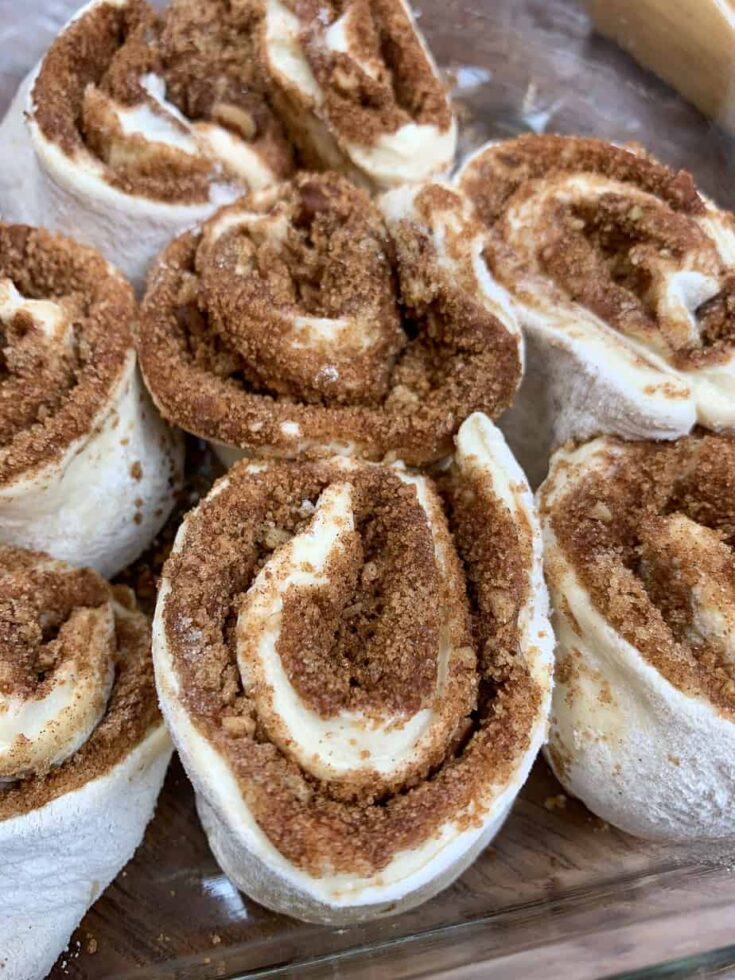 Here’s how they look in the pan. 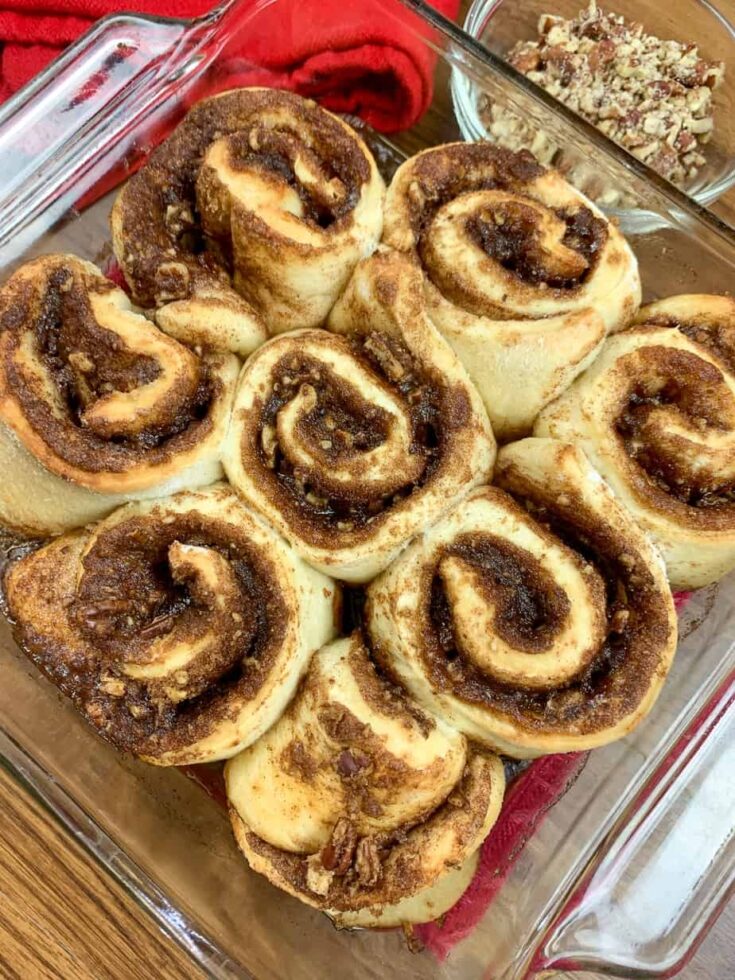 Bake the cinnamon rolls for 20-25 minutes, or until the edges are brown, on 350-degrees.

The butter will melt and run down into the bottom of the pan, making the rolls super rich and flavorful. This is definitely one of my favorite desserts. 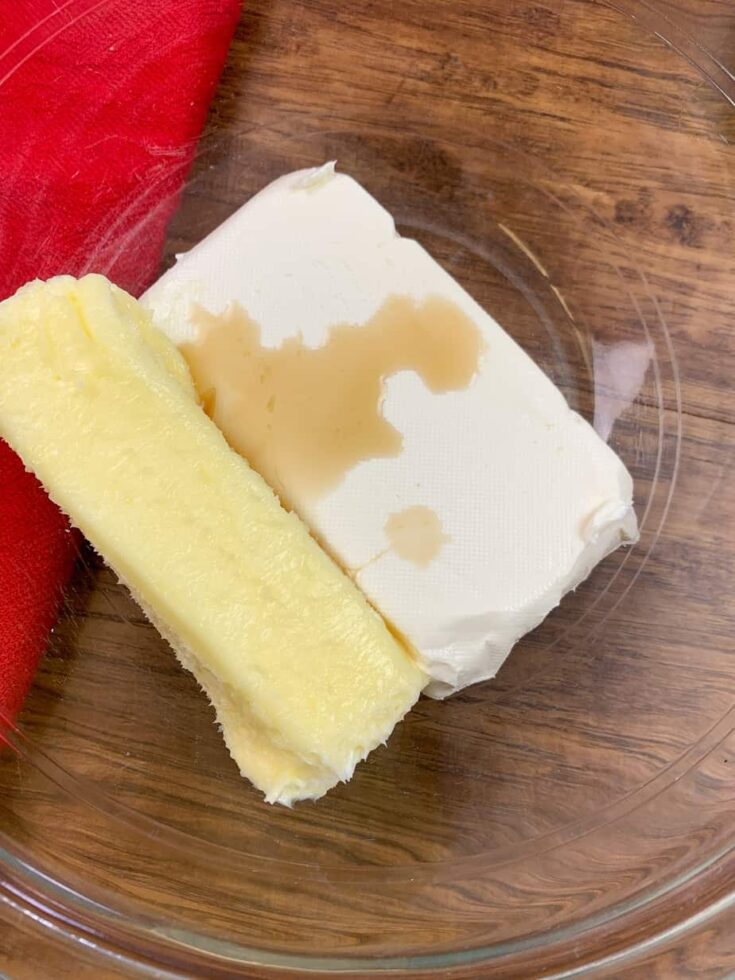 Add the softened butter, softened cream cheese, and vanilla extract to the bowl and cream. 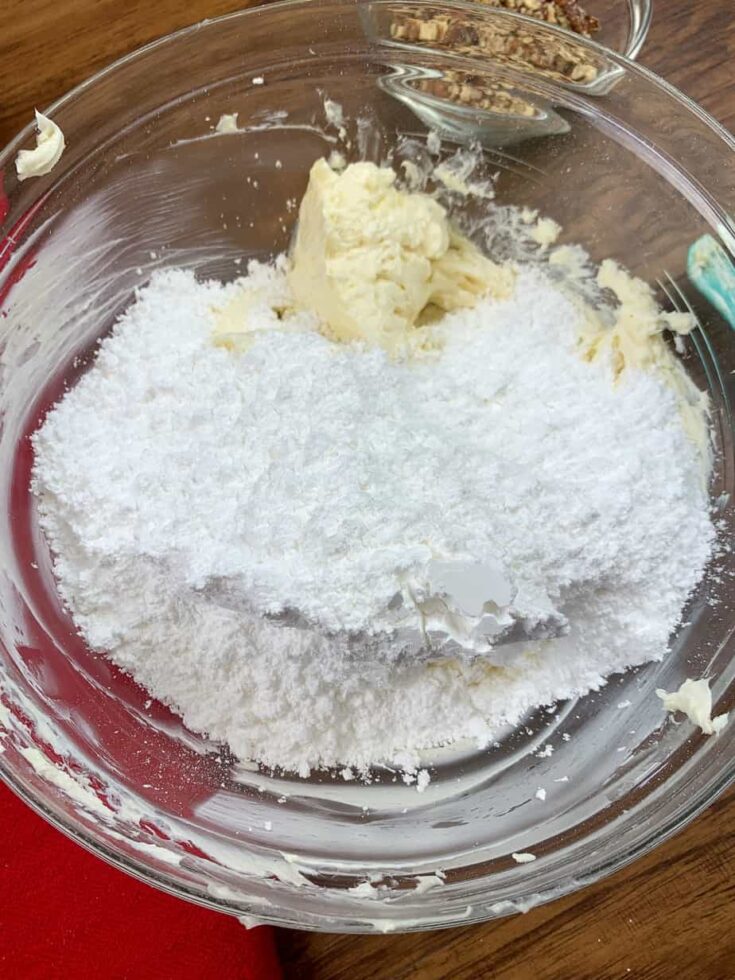 Next, add the Powdered sugar to the bowl and mix well. 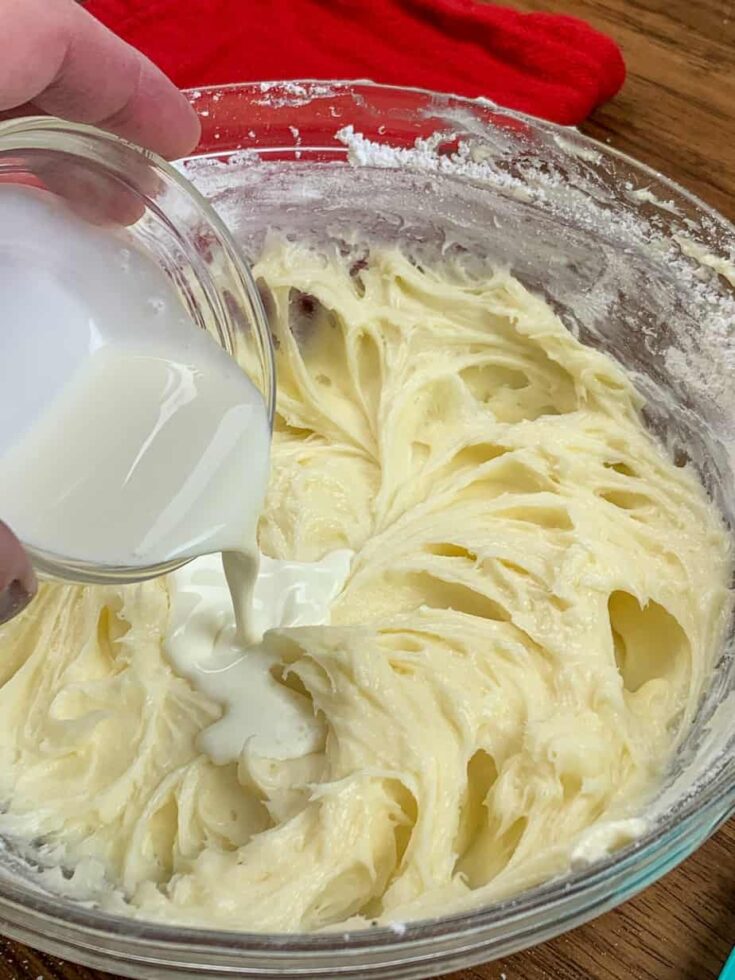 Finally, pour the heavy cream over the frosting and mix well. 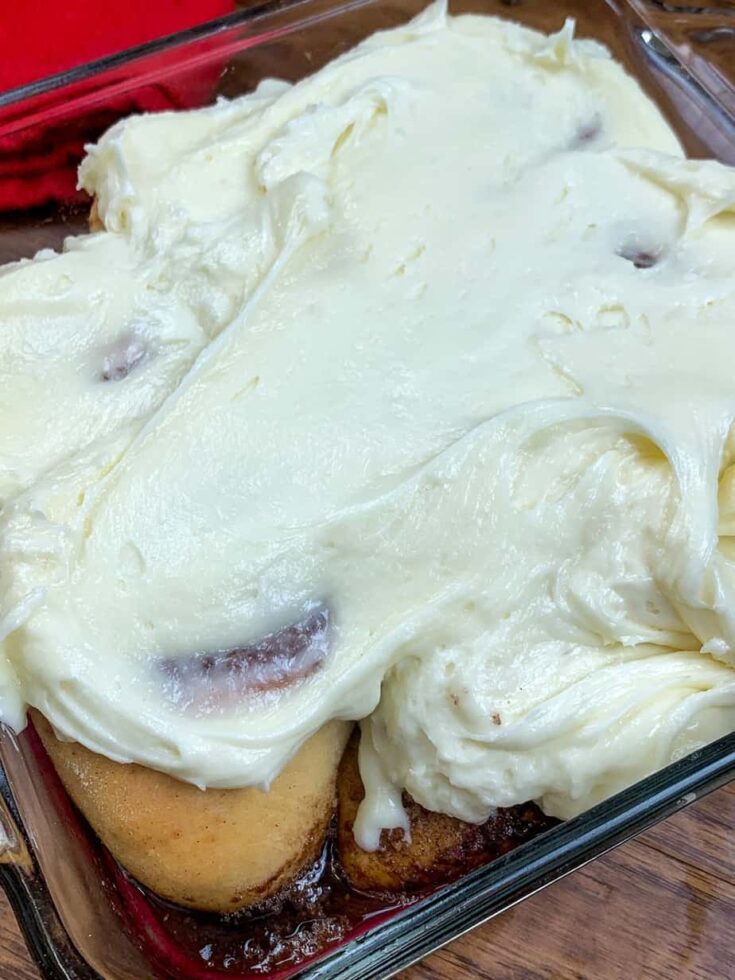 Spread the cream cheese frosting on top of the cinnamon rolls and sprinkle the remaining chopped pecans on top.

It’s a lot of frosting, so you may not want to use it all, and if you don’t you can save it for something else! 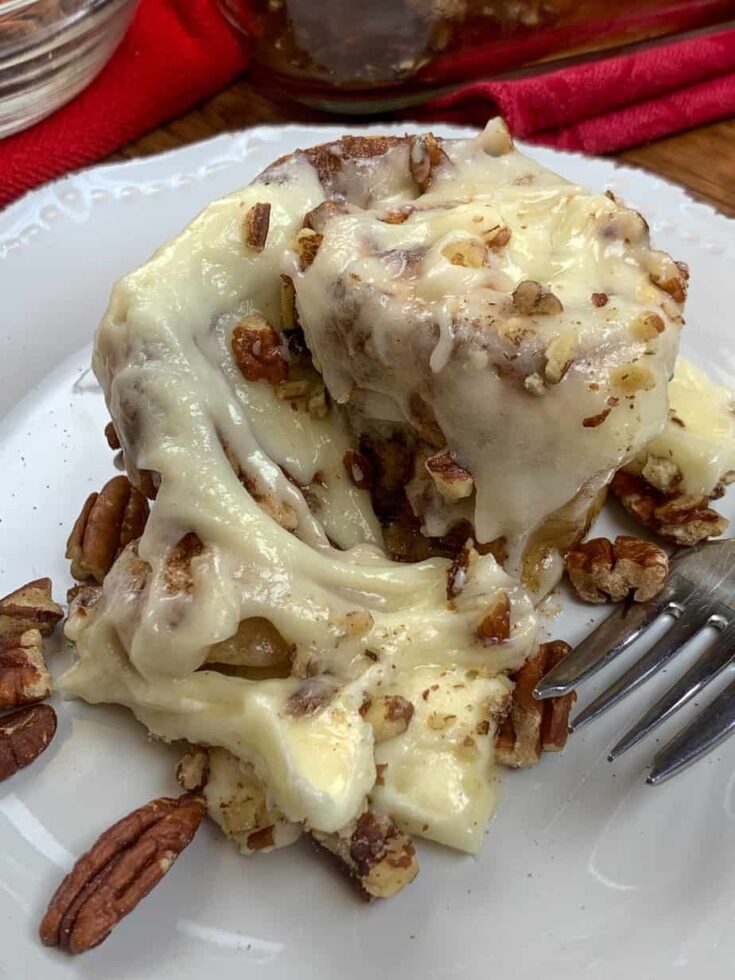 The rolls are especially delicious when they are still warm. You can reheat the cinnamon rolls in the microwave for about 20-30 seconds. 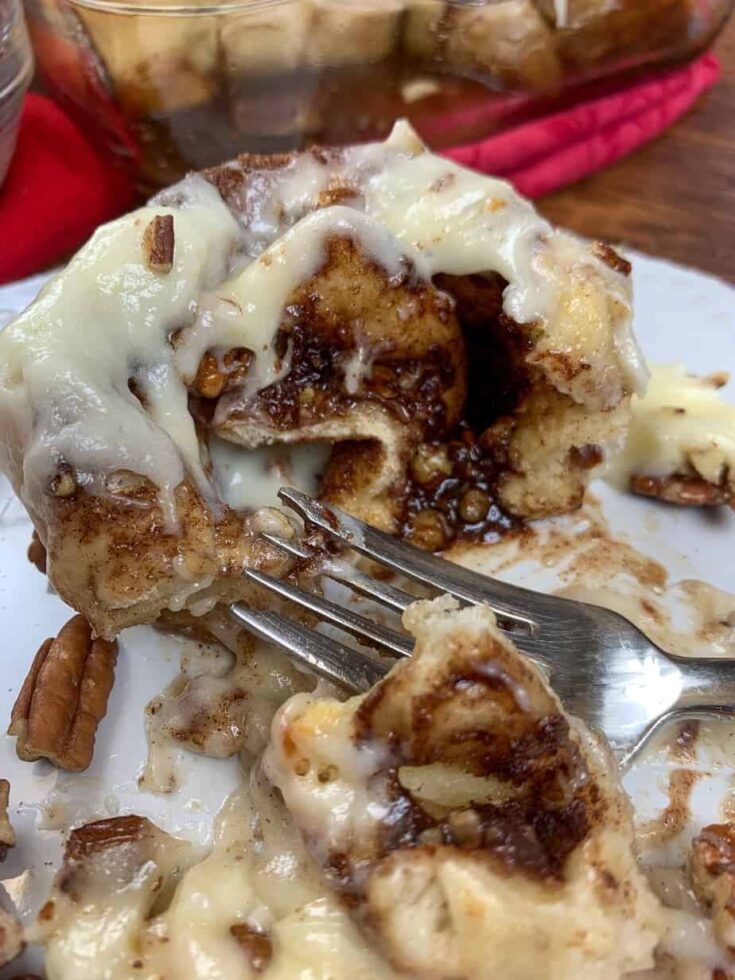 The inside of these rolls is absolutely divine. I promise!

Check out the pecan cinnamon roll recipe card below, grab those ingredients, and start baking! This is a great dessert any time of the year, and I think you’ll  love it.

How do you know when cinnamon rolls are done?

Can you freeze cinnamon rolls?

Yes, but make sure you store them in an airtight container and allow them to thaw on the counter. Once the cinnamon rolls have thawed, you can put them in the microwave for about 30 seconds to warm them up.

Can you bake cinnamon rolls in a glass pan?

Yes, that is what I baked my cinnamon rolls in. You can also use stoneware.

If the frosting is too thick, add more heavy cream. If it's too thin, add more powdered sugar.

Check out more recipes at:

Can you use store bought pizza dough in the can?

Hi Pat, I think that would work fine.

French Toast Casserole - Back To My Southern Roots

[…] Pecan cinnamon roll recipe is another great addition to any breakfast. Plus, there’s no waiting around for dough to rise in this simple recipe. […]

Sweet Potato Casserole - Back To My Southern Roots

[…] add the pecans and melted butter. Mix everything together until the pecans are covered. You can almost smell it can’t you? Soooo good. It’s the perfect […]

Butter Pecan Fudge - Back To My Southern Roots

[…] Pecan cinnamon roll recipe will feed a lot of people for breakfast. And, there’s no waiting for it to rise. […]